Sunscreen, Lipgloss and Thick Skin: how to stay afloat being a Female Angler in Louisiana 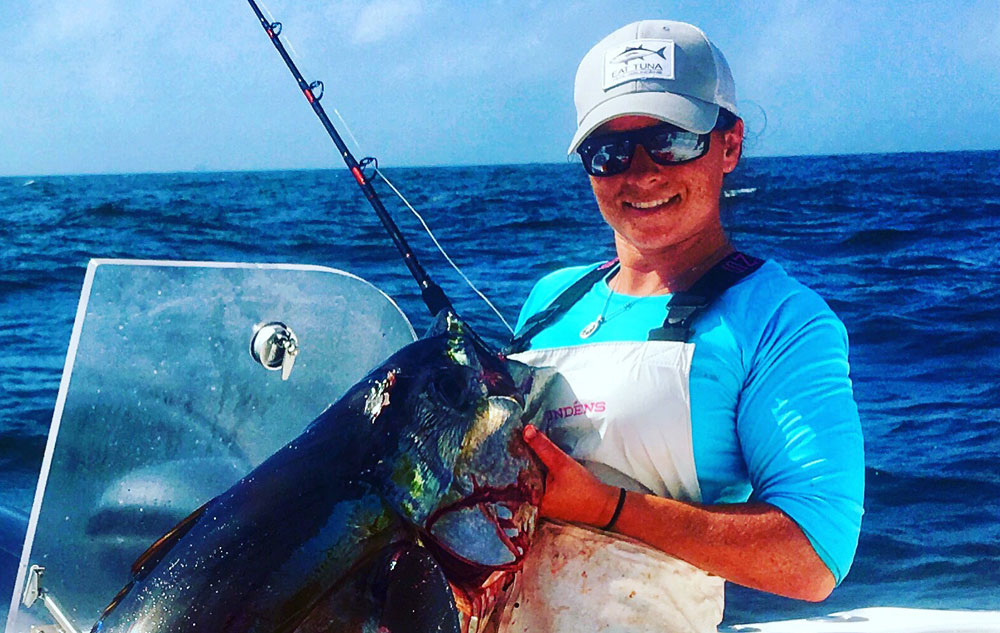 "You can't be a fisherman and a sissy."

This was one of the first phrases I heard offshore that resonated with me. In a male dominated industry, I am an outlier as a Deck Hand in Venice, Louisiana. Venice is by no means the white sand, fruity drink-filled land of multi million dollar boats that you would expect to see in South Florida. "Tuna Town" as it is commonly referred, feels and looks like the end of the Earth. With a few Dollar General Stores and some heavily price-inflated gas stations, what you see is what you get. There are no mainstream day-to-day luxuries within and hour and a half drive. People from around the world come to Venice for one thing: the fishery.

I began fishing offshore as a kid in New England. Not much of what we do there translates to Gulf Coast sport fishing. When I took my first trip offshore out of Venice in 2015 it was glaring that I had a lot to learn, not only about the landscape and techniques, but how to be taken seriously as a female angler.

If you see a woman in Venice, most likely they are a charter customer, work at the marinas, or have big white letters that read 'LADWF' on their shirts. Very few people, let alone women, actually live IN Venice and if they do, it's a safe bet they work on a boat. That vessel might be an oil ship, a shrimp boat or a charter service boat. To my knowledge there is one female guide and one female first mate (myself) in Venice. Many guides have a second residence somewhere more "on the grid" for the offseason. In Venice the drinks are poured strong, the weather can be a tempest and when those collide, often the inevitable small town drama can erupt. Most of the time I try to keep my opinions about my surroundings to myself. Venice gossip can unfold like your Miranda Rights: anything you say can be used against you.

Like many professions that become glamorized through Instagram filters and big fish, the people who fish day in and day out can be protective of Lower Plaquemines Parish. Many captains have to work up the ranks by deck handing for several years before the getting opportunity to run their own boat. Resentment is inevitable towards those with deeper pockets who many not start from the bottom. If you want to captain a boat and you have an out of state license plate, you might want to consider a trip to the DMV. But, if you can keep your skin as thick as the layer of sunscreen a redhead uses, you will in time be welcomed.

The first tuna tournament I ever fished I became hellaciously sea sick. Partly in jest my captain asked, "would you like some Triactin?" I said sure, whatever helps. He replied, "try actin' like a man!" to which the rest of the crew got a good chuckle and I buried myself deeper into a bean bag. Conquering seasickness was the first of many lessons I have learned since then. Finding a captain who would hire a female as their primary deck hand was the next challenge. This is where the minority worlds of out of state captain, and female working on a boat worked to my favor. I feel fortunate to have found someone who gave me a fair chance, and maybe it's because that's all anyone really wants.

As a female First mate I find myself trying to prove myself twice as much as a guy with the same experience. With the endless Instagram accounts of perfectly coiffed, "enhanced" and scantily clad ladies holding fish, it's hard to believe much work is being done by them in the actual fishing part. When it's February, 55 degrees with 4-6’ seas I have never gone fishing without bibs or boots, and never come home with clean or unbroken finger nails. Let's not even talk about hair. I don’t want to beat anyone down for their modeling photos, but I'm left incredibly skeptical at how much participation is given to catch these fish. Who's got the time to powder their nose and wipe runny mascara when you just caught a trophy fish? You cannot fake the authenticity of holding a fish that you just muscled up from the deep. And frankly, I believe seeing the learning going in it, the knot tying, fish cleaning and boat washing is half the fun. I do recognize that a 90 degree August day may cause some shedding of layers, but must we take a photo holding a fish with our backsides facing the camera?

Working hard and playing hard also don't mix. I am asleep no later than 9 PM before a charter. This is partly out of discipline but mostly due to exhaustion. If I don't  stay hydrated the trip the next day I’m going to pay for it. Gone are the days of late night beverages and evenly tanned faces. The sun can be a brutal foe if one doesn’t cover up and reapply the 'ol SPF.

I worked in television news for over a decade. That was a decade of working weird, long hours and being critiqued and criticized by total strangers. These things probably helped me toughen my skin for the fishing world. Nowadays I find more satisfaction looking like I worked all day rather than staying perfectly primped. I'm learning as a female working on the water that you will genuinely win your customers over more through hard work and a friendly personality than flashy looks and speaking proper. I still enjoy dressing up and letting my hair down when the wind isn’t blowing 20 kts. There is room to be both female and a badass on a boat.

As more and more women take the leap of faith into the fishing world, my hopes are that we aren't written off for our size, or the fact that it takes us twice as long to get out the bathroom bucket on the boat. I believe women are fast learners because they don't assume to know everything before hand. The ladies who fish for the love of it and not the Followers or free product may never get free trips exotic places for looking good in a bikini, but I have faith we can outlast the Instafame. We too can withstand the uncensored world that is Venice and share the love of fishing with other women.
--
Martha Spencer